The End of Winter 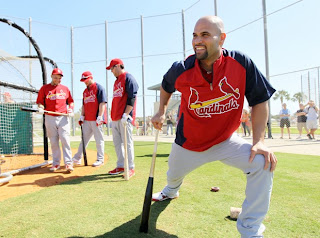 Don't tell me about the world. Not today. It's springtime and they're knocking baseballs around fields where the grass is damp and green in the morning and the kids are trying to hit the curve ball. ~Pete Hamill

The President on Prayer, Humility, and the Search for Wisdom 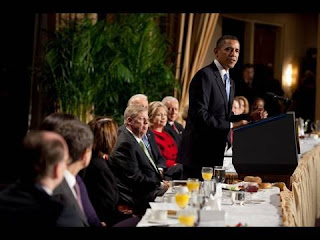 We see an aging parent wither under a long illness, or we lose a daughter or a husband in Afghanistan, we watch a gunman open fire in a supermarket -- and we remember how fleeting life can be. And we ask ourselves how have we treated others, whether we’ve told our family and friends how much we love them. And it’s in these moments, when we feel most intensely our mortality and our own flaws and the sins of the world, that we most desperately seek to touch the face of God. – President Barack Obama, February 3, 2011

[T]here are some needs that require more resources than faith groups have at their disposal. There’s only so much a church can do to help all the families in need -- all those who need help making a mortgage payment, or avoiding foreclosure, or making sure their child can go to college. There’s only so much that a nonprofit can do to help a community rebuild in the wake of disaster. There’s only so much the private sector will do to help folks who are desperately sick get the care that they need.
And that's why I continue to believe . . . that our values, our love and our charity must find expression not just in our families, not just in our places of work and our places of worship, but also in our government and in our politics.

This is, of course, an area that distinguishes philosophically the president and most Democrats from many Republicans, who place greater emphasis on acts of charity and resist the role of government as compassionate benefactor. It is a debate that goes to the heart of our democracy and the role of government. There is certainly room for principled disagreement. But there is no room to question the president’s faith, or patriotism, or love of country. Perhaps this is why the president also spoke of the importance and need for humility. For however polarized and divisive our politics may become, it is always “useful to go back to Scripture to remind ourselves that none of us has all the answers -- none of us, no matter what our political party or our station in life.”
“The full breadth of human knowledge is like a grain of sand in God’s hands. And there are some mysteries in this world we cannot fully comprehend.” It is this challenge, then, the need to balance uncertainty and humility and to be open to other points of view, with the need to fight for what is right and to remain committed to one’s deeply held convictions, which forms the core of our democracy and underlies the president’s need for prayer. Only by constant “reminders of our shared hopes and our shared dreams and our shared limitations as children of God” can Americans travel forward together.
At the conclusion of his speech, the president noted that, while he hopes his prayers will be answered, he knows “that the act of prayer itself is a source of strength. It’s a reminder that our time on Earth is not just about us; that when we open ourselves to the possibility that God might have a larger purpose for our lives, there’s a chance that somehow, in ways that we may never fully know, God will use us well.” Amen, Mr. President.
Posted by Mark J. Ehlers at 8:14 PM 12 comments: