The Waters of Memory

Not far downstream was a dry channel where the river had run once, and part of the way to come to know a thing is through its death. But years ago I had known the river when it flowed through this now dry channel, so I could enliven its stony remains with the waters of memory. – Norman Maclean, A River Runs Through It and Other Stories

Hannah and I journeyed to Phillipsburg, New Jersey, this past Sunday to visit my father’s gravesite. Hannah was studying abroad in Israel when my father died four months ago and she wanted to visit Dad’s resting place before summer passed us by. On a beautiful, sun-filled afternoon, we drove through scenic Bucks County along the Delaware River as we listened to a recording of Dad’s funeral service from North Carolina. Dad was a city boy who grew to love the country, so it was particularly fitting to listen to eulogies and remembrances of my father while driving along a stretch of land he loved and admired.

We passed through the quaint towns and tree-lined thoroughfares of northeastern Pennsylvania and admired the lush green countryside, the classic red barns, the rivers and streams that wind their way through this wondrous land. Crossing the river into northwestern New Jersey, we ascended the rolling hills of historic Phillipsburg, where I was mysteriously comforted by the familiarity and memories of a quiet little town I never really knew.

I was only two years old when my family left Phillipsburg, so the bulk of my memories of this place are based on the remembrances of others, photographs, and visits here later in life. And yet, I felt a strong sense of belonging as we drove through the town’s quiet streets and approached St. James Lutheran Church, where my father was pastor for eight years following his graduation from seminary. An historic church dating to the early 1700’s – one of its first pastors was J. Peter Muhlenberg – it is known as the “Old Straw Church” for its early days (before the current church building was constructed in 1834) when it sat in the midst of local farms and the rural surroundings of a less industrial time and place. Today, the church sits on a tiny stretch of land surrounded by highways, a lonely island of contemplation sandwiched between thoroughfares lined with fast food joints and retail outlets, an isolated outcast of spirituality amidst an American cacophony of development. 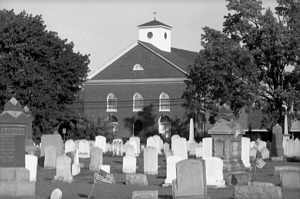 The church’s old cemetery sits across the street, its collection of head stones and gravesites dating back to the 18th century. There is something both odd and comforting about seeing your surname on a head stone, a reference to The Rev. Edwin L. Ehlers, “1929 – 2015, Devoted Husband, Father, Pastor,” as if Dad is there watching through the gentle breeze. The rational side of me knows otherwise, but the spiritual side, the person of faith that refuses to let go despite the noise and distractions of everyday life, senses his presence. I am comforted by the thought that Dad is there with us, watching over us with a gentle smile.

The void left by my father’s passing has forced me to examine the narrative of my life, the plot points that explain who I am. A presence I had taken for granted – Saturday phone calls and twice yearly visits – are missing now, filled by memories and photographs and stories of days forever lost. I try to think of the stories my Dad shared with us over the years, of places and people he had encountered along the way. Like the day he saw Jackie Robinson play his first minor league game in Jersey City in 1946 or when he jumped for joy in 1951 after Bobby Thompson’s home run won the pennant for the New York Giants on the final day of the season. Or tales of sadder times, such as the moment he learned his brother had been shot from the skies over Austria in 1945. His life as a Lutheran pastor offered stories of joy and sadness, growth and heartbreak, from the many people and families he counseled and comforted along the way.

Stories are a fundamental part of being human and help us make sense of the world around us. In truth, my Dad was not a storyteller in the traditional sense, though he offered anecdotes of life-shaping moments whenever they proved instructive or helpful to others. The “stories of life are often more like rivers than books,” wrote Norman Maclean in A River Runs Through It. They flow under and around us, quietly carving and shaping our lives and the memories we hold dear.

I wish I remembered more clearly the stories and anecdotes my father told throughout his life, or recalled some of his Sunday morning sermons. I wish we had played more golf or taken more walks together. Maybe then I would have better remembered the wisdom and insight he offered along the way.

The anecdotes of life – the humorous moments, the challenges confronted and lessons learned from the mistakes and experiences of our lives and the lives of others – are what guide us and help us place in context the narrative arc of our own existence. If we could place time in a bottle, we would have less need for memories and less regret for wasted days. For now, I must content myself with the meaningful memories of my past and hopeful longings for the future, for my children, and whatever years I have left on this earth.

In Loud and Clear (Random House, 2004), author and columnist Anna Quindlen writes of her regrets, after her children had grown, of not living in the moment when they were younger. “This is particularly clear now that the moment is gone, captured only in photographs,” she writes. She looks at an old photograph of her three young children “sitting in the grass on a quilt in the shadow of the swing set on a summer day . . . And I wish I could remember what we ate, and what we talked about, and how they sounded, and how they looked when they slept that night. I wish I had not been in a hurry to get on to the next things: dinner, bath, book, bed. I wish I had treasured the doing a little more and the getting it done a little less.”

As life passes by ever so swiftly, as I look down at my father’s gravesite while standing with my youngest daughter, now a senior in college, I feel the same regrets so eloquently expressed by Anna Quindlen. Like the waters of a flowing stream and the whispers of a gentle breeze, we remember, we live, and we move on. For in the words of Henry Wadsworth Longfellow, “The heart, like the mind, has a memory. And in it are kept the most precious keepsakes.” 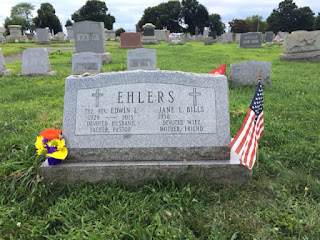 Let us be silent, that we may hear the whisper of God.
― Ralph Waldo Emerson
Posted by Mark J. Ehlers at 6:26 PM No comments: