A Wish for Peace in a Time of Conflict 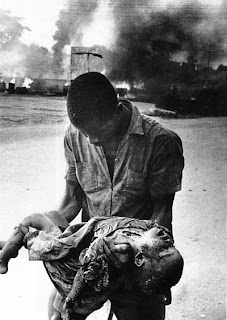 As I walked from the train station to work this morning, a cold December wind blew against my face. I pushed ahead, determined to trade the harshness of winter for the synthetically heated warmth of my office building, where I could sip hot coffee and look out over the horizon from my 21st floor window, past the Schuylkill River and the suburbs of western Philadelphia. Securing the scarf around my neck, my eyes focused on the sidewalk beneath my feet, I grabbed the top of my coat to insulate myself from the wind currents gusting violently between the city’s buildings. For three short blocks the cold air stung my face and I desired only to escape the harsh realities of the day’s weather. Meanwhile, a child of a drug addicted mother in Camden went hungry last night, lacking a nutritious meal and, more importantly, the love and support of a loving parent; a homeless man in Philadelphia found warmth on a subway grate and scrounged for food in city trash bins.
Yesterday, 3,500 Africans died of AIDS and 16,000 children died of starvation and malnutrition; another fifty children were killed or maimed by landmines in places like Cambodia, Iraq, and Mozambique; a dozen people were murdered in Ciudad Juarez, as drug cartels and corruption overtake major segments of Mexico. Every thirty minutes, someone in the United States is murdered and 60 more are assaulted.
As millions prepare to celebrate the birth of the Prince of Peace, two people are killed every minute in conflicts around the world. Millions more perish from hunger and disease, malnutrition and extreme poverty. And yet, for most of us, as we sing carols and hymns, drink eggnog, and open presents, we know little about the people struggling and fighting and dying every day.
As a lighted Christmas tree adorns the Blue Room of the White House, the Obama administration escalates the military conflict into Pakistan’s tribal areas and continues to fire drone missiles into villages in northwest Pakistan and Yemen in the hopes of making the world a safer place. Air strikes are clean and precise, like a video game, yet the reality of these bombs are tragic.
Last year at this time, as Christians the world over prepared to celebrate the birth of Christ, a U.S. cruise missile struck an alleged al-Qaeda training camp in Yemen. The strike was a “successful” blow against terrorism, as fourteen al-Qaeda fighters were killed. But as The Nation reports this week, an investigation by the Yemen Parliament found that fourteen women and 21 children were also among the dead. One week later, U.S. missiles fired upon another Yemeni village with similar results. The folly of humankind continues.
The more advanced we become, the further backward we move. In an age when all seemed possible, when we invented the automobile and air travel, cured polio, created the information highway, and landed men on the moon, the 20th Century was the most violent in all human history; the nations of Europe and Asia fought wars of unparalleled magnitude, as death, destruction, and unimaginable carnage were the order of the day. In Normandy in 1915, a young man lay on the ground in eternal peace, one of the millions who perished in the war to end all wars. Found among his possessions was a card inscribed with the words of St. Francis, “Lord, make me an instrument of your peace; where there is hatred, let me sow love; where there is injury, pardon; where there is doubt, faith; where there is despair, hope; where there is darkness, light; where there is sadness, joy. . . .” Maybe he held the card for good luck, or perhaps it was a gift from his mother, who decades after suffered silently as she mourned the loss her only son.
Thirty years later, on the morning of August 6, 1945, the first atomic bomb exploded over Hiroshima, a city of 255,000 people. In one blinding flash of heat and light, the equivalent of fifteen kilotons of explosives was dropped by U.S. forces, indiscriminately incinerating the bodies of 66,000 men, women, and children within a one mile radius. Tens of thousands more died from the bomb’s effects over the next few months. Two days after the bomb dropped, a survivor recorded this account in his diary:

Towards evening, a light, southerly wind blowing across the city wafted to us an odour suggestive of burning sardines. I wondered what could cause such a smell until somebody, noticing it too, informed that sanitation teams were cremating the remains of people who had been killed. Looking out, I could discern numerous fires scattered about the city. Previously I had assumed the fires were caused by burning rubble. Towards Nigitsu was an especially large fire where the dead were being burned by hundreds. Suddenly to realize that these fires were funeral pyres made me shudder, and I became a little nauseated. 8 Aug 1945.
--From Hiroshima Diary by Michihiko Hachiya.

A second atomic bomb packing even more kilotons of explosives soon befell the 195,000 citizens of Nagasaki, killing 60,000 more. Casualties are difficult to calculate with precision, however, because the great fires that raged in each city totally consumed many bodies and destroyed the city’s hospitals. It is said that the light emanating from an atomic explosion is comparable to that of the sun, the temperatures and pressure comparable to the sun’s interior. The light rays consist of thermal radiation that burns everything in its wake and penetrates the human body. In the immediate aftermath of the Hiroshima and Nagasaki bombings, nearly a third of the population was killed by burns, trauma, or radiation. Those who did not immediately perish developed various forms of cancer; babies born to mothers who had been exposed to the bomb suffered brain damage; the children of survivors experienced harmful genetic effects.
“We have grasped the mystery of the atom and rejected the Sermon on the Mount,” declared General Omar Bradley in 1948. “Ours is a world of nuclear giants and ethical infants. We know more about war than we know about peace, more about killing than we know about living.”
As we sing carols on Christmas Eve, three dozen countries around the world will remain in a state of perpetual conflict and violence. U.S. troops will celebrate their tenth Christmas in Afghanistan. War will continue to cause untold economic and social damage to large portions of Africa, with civil strife in Nigeria, civil wars in Somalia, Ivory Coast, Liberia, and Burundi, and threats of genocide in Darfur. In many areas of conflict, food production is impossible, resulting in famine, starvation, and human suffering beyond description. Many of Africa’s children will be condemned to lives of misery, despair, and hopelessness.
In the time it takes to open presents on Christmas Day, four more children will be maimed or killed by landmines. Many of the victims will resemble an eight year-old Pakistani boy named Shiraz, who lost his leg when he attempted to walk home after army personnel told him that it was safe to do so. “But on the way I stepped on a bomb and it exploded there. My father tied a cloth around it but it kept bleeding. I was conscious so I could see the blood flowing out of my body. Then I was brought to the hospital.” Though he will never again walk like a normal child, he now wishes to become a doctor, so that he can help others.
“Peace cannot be obtained through violence,” said Albert Einstein, “it can only be attained through understanding.” As we celebrate the spirit of Christmas, sing our favorite carols, enjoy the dazzling displays of lights and ornaments, we can only hope for a day when humankind will put the kindness back into humanity, and the world will take stock of its senses. What can we do? We can start by promoting and supporting dialogue, by encouraging genuine exchanges among peoples and cultures that have otherwise convinced themselves they are at war. “If you want to make peace,” advised Moshe Dayan, “you don’t talk to your friends. You talk to your enemies.”
Each year as Christmas approaches, I pray that nations and warriors will lay down their armaments and seek understanding and peace. History offers an occasional glimmer of hope. In the winter of 1914, on a battlefield in the Flanders region of Belgium, German forces were engaged in a fierce battle with French and British troops, when a most unusual thing occurred. With both sides dug deeply in their muddy trenches, some German troops placed small Christmas trees, lighted with candles, outside of their secured positions and began singing Stille Nacht (Silent Night). Soon, British and French troops joined in. A German signboard displayed, in broken English, “You No Fight, We No Fight” as British units improvised a sign containing a German version of “Merry Christmas.” A spontaneous truce soon developed, as soldiers from both sides put down their arms and left their trenches, meeting in the middle to shake hands. They helped each other bury their dead; they exchanged gifts – chocolate cake, cognac, postcards, tobacco – and they sang songs. In a few places, soldiers played each other in games of soccer. It didn’t last, of course, but for a few precious moments, there was peace on earth and good will toward men.
Posted by Mark J. Ehlers at 10:59 PM 3 comments:

The Ambiguity of Faith and the Language of Religion

Therefore be at peace with God, whatever you conceive Him to be; and whatever your labors and aspirations in the noisy confusion of life, keep peace with your soul. With all its shame, drudgery, and broken dreams, it is still a beautiful world. – Found on Old St. Paul's Church in Baltimore.

When I was a young child, my faith consisted of the teachings of my parents, church, and Sunday school classes. It was a simple, straightforward faith, founded in a firm and unquestioning belief in the holy trinity, the divinity of Jesus, and eternal salvation. It was a positive and uplifting message, emphasizing the benefits of devout faith. I recall little mention of Hell and Satan; there were no fire-and-brimstone preachers, at least none that I confronted, and the people and pastors I met in the Lutheran congregations of New Jersey appropriately combined their faith with humor, compassion, and a healthy dose of secularism.