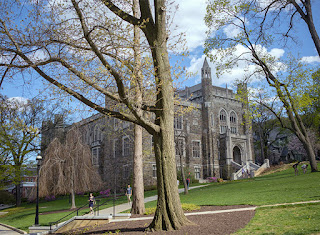 Only that day dawns to which we are awake. There is more day to dawn. The sun is but a morning star. – Henry David Thoreau

Earlier this week I drove to Lehigh University in Bethlehem, Pennsylvania, for work-related business. An unseasonably warm and sunny March day, I cracked opened the car windows and let the early spring air brush against my forehead and refresh my senses. The hour plus drive up the Northeast Extension of the Pennsylvania Turnpike, a scenic and peaceful stretch of hills and farms, allowed me to reflect on life, longing, and the passage of time.

Upon arriving, I took a moment to walk around the beautifully wooded hillside campus spread across 2,300 acres of Pennsylvania’s Lehigh Valley. Situated fifty miles north of Philadelphia and 75 miles west of New York City, the campus contains a vibrancy that belies its quiet location. Although I was born a few miles away in Easton, my only previous visit to Lehigh’s campus was in the early 1970s when I accompanied my family to a Wittenberg-Lehigh football game. The air had a familiar feel and scent.

As I walked along the campus commons and watched students lounge, talk, walk hurriedly to class, and toss Frisbees, I felt the years melt away. I thought back to a time 35 years earlier when I walked across Wittenberg’s campus between classes, books in hand and thoughts filling my head as I stopped to talk with a classmate or to sit on a tree-sheltered bench in front of the library.

When my meetings at Lehigh concluded and it was time to leave, I took a final look around and felt a slight pang in my heart. A few minutes later I realized what it was, this sense of loss as I left campus, for I wanted to call home and talk with my Dad about work and life and my morning at Lehigh. He would have liked that. He had spent nearly a decade in this part of the country when he was a young Lutheran minister in Phillipsburg, New Jersey, just across the river. Like me, Dad enjoyed exploring college campuses. When I was younger, we occasionally found ourselves walking along the campuses of Princeton and Harvard, Holy Cross and Dartmouth, and many smaller and lesser known schools near places my Dad visited when we lived in New Jersey and later Massachusetts.

I think now I know why Dad liked college campuses so much. They remind us of when we were young, when life seemed full of possibility, the world and everything about it a place of creative exploration and learning; when opportunities awaited our advancing progress and many paths seemed open to us. College was a time of hopeful uncertainty, when it was safe to dream of being and doing anything; of being “a free man in Paris . . . unfettered and alive” as Joni Mitchell sang on Court and Spark.

There is a reason young people are on the whole more idealistic than the rest of us, and that cynicism and despair increase as we grow old. For Dad and me, college campuses were a brief respite from all of that. They reminded him, as they continue to remind me, of a time years ago when we possessed grander visions.

When he was a pastor in northern Virginia in the 1980’s and early 1990’s, one of Dad’s favorite activities was his annual visits to nearby colleges attended by the sons and daughters of congregants, the same kids he confirmed five or six years before and counseled in youth group rap sessions. From his church in Maclean, Virginia, he visited schools like Washington and Lee, Virginia, and VMI. Dad always had a sense of hope and optimism when he talked of such visits. He enjoyed speaking to young people, learning about their studies and college experiences, and discussing with them their future plans, anxieties, and dreams. I love that too, and I am certain I have annoyed more than a few college and graduate students with questions about their studies, their plans, their hopes for the future. And yet, I have had some of my best conversations with my daughters and their friends when focused on their goals, their concerns, and the many options and obstacles that lie ahead.

In the final decade of his life, my Dad loved hearing about what schools Jen and Hannah had applied to and, after leaving for college, what classes they were taking, their activities and internships, and their experiences abroad. He did not always have advice relevant to the 21st century economy (nor do I), but the girls and I enjoyed his interest in their lives and futures.

These are the conversations I miss the most since my Dad died nearly a year ago. It hits me only occasionally now, but there are some days, like my visit to the Lehigh campus, that leave me with a momentary sense of remorse, when I am reminded that death is forever and there is no turning back; and when I am forced to acknowledge that loss is permanent.

But then again, maybe the immutability of loss is but an illusion. I am reminded of a scene in one of my favorite movies – a cute, inspiring film I used to watch with my daughters when they were young about a 13 year-old girl named Amy who moves back with her Dad after her mother dies in a car accident. Her Dad, played by Jeff Daniels, is an eccentric, free-spirited inventor, who lives on a farm in rural Canada. Early on, Amy finds a nest of abandoned goose eggs, which she nurtures and watches over until they hatch. The baby geese immediately associate Amy as their mother, and she raises and cares for the goslings as if they were her children. The goslings follow Amy everywhere. But with the approach of winter, she and her Dad realize they must find a way to lead them south. Based on a true story, Fly Away Home contains beautiful scenes of the Canadian countryside and of the geese in flight after Amy’s Dad builds two small engine-assisted gliders, one painted to resemble a large goose. Ultimately, Amy learns to fly the goose-like contraption and, together, she and her Dad fly along the east coast of the United States from Canada, with all of the young geese in tow, before landing safely in a nature preserve in North Carolina.

In one memorable scene, the Dad’s glider malfunctions and he crash lands, dislocating his shoulder. He insists Amy continue on without him. But Amy doubts herself.

“I can't find my way without you,” she says.

There is wisdom and simplicity to this notion of spirit, of the ineffable presence of loved ones no longer with us. I would like to believe there is truth to the notion that those who precede us in death remain with us in life, present in the sun, the sky, the trees, and the geese. And why not? What is this life all about if not to fulfill some larger circle of existence?

“It’s not what you look at that matters, it’s what you see,” wrote Henry David Thoreau. “This world is but a canvas to our imagination.” To find inspiration in the clouds, the grass beneath our feet, and the mane of a wild horse, is to transcend the limits of time and mind. I can no longer talk with my Dad about the things which most excited him, and from which he had much to say. But I will continue to have those same conversations with my children. And I will know that, in some inexplicable way, Dad’s voice continues to be heard. For as the author Henry Stanley Haskins wisely said, “What lies behind us and what lies before us are tiny matters compared to what lies within us.” 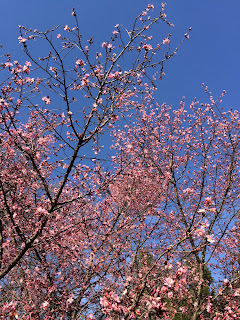 Give me the splendid, silent sun with all his beams full-dazzling.
– Walt Whitman
Posted by Mark J. Ehlers at 7:25 AM No comments: