Caught in the Middle: Women's Rights and Coming of Age in the Seventies 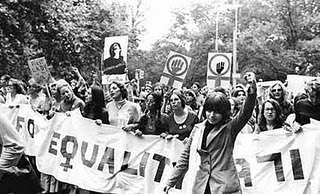 Men weren’t really the enemy, they were fellow victims suffering from an outmoded masculine mystique that made them feel unnecessarily inadequate when there were no bears to kill. – Betty Friedan.

I was born in 1959, when Eisenhower was President and men wore business suits to baseball games. The civil rights movement was still in its infancy, Americans had yet to conquer the moon and Vietnam was a distant, far-off country that few people had heard of. The Cold War was in full bloom, the threat of nuclear annihilation hovered like a dark cloud above, and men ruled the world.
John Kennedy was elected President in 1960, in the Age of Camelot. With a young, handsome President and his glamorous wife on the cover of Life magazine, America was filled with optimism and youthful energy. Sophisticated and regal, Kennedy was, like his predecessors, surrounded almost entirely by men, the Best and the Brightest they would later be called, men who had been educated at Harvard and Yale, Andover and Choate, who promised to “pay any price [and] bear any burden . . . to assure the survival and the success of liberty.” They possessed an upbeat, optimistic view of the world and of America’s place in it. Although it all ended a few years later at the hands of a lone assassin, it remained a man’s world.
Kennedy’s men, and later Johnson’s and Nixon’s men, would embroil us in a difficult, messy, unjust war and struggle to make sense of changing times, but as a young boy growing up in suburban New Jersey, it seemed perfectly natural that men made the decisions and held positions of power and influence. Virtually all of my role models, the persons I wished to emulate, whether politicians, ballplayers, musicians, or actors, were men.
For the first decade or so of my life, American society had clearly defined roles for the sexes, or so it seemed. Boys were expected to pursue careers in law and medicine, run our companies, make our laws and, when necessary, fight our wars. Girls were expected to get married, have children, and provide emotional support for their families. It was almost that simple. Men were CEOs, Senators and Presidents, doctors, scientists and lawyers. We ran the corporations, the banks, the universities, and the government. Women labored in service-oriented and subservient positions, as nurses, teachers, librarians, and secretaries. The status of women, as explained in Woman in Sexist Society: Studies in Power and Powerlessness (New York: Basic Books, 1971), was “the result of a slowly formed, deeply entrenched, extraordinarily pervasive cultural (and therefore political) decision that . . . woman shall remain a person defined not by the struggling development of her brain or her will or her spirit, but rather by her childbearing properties and her status as companion to men who make, and do, and rule the earth.”
By the time I entered high school in 1974, the Supreme Court had ruled for 100 years that the Equal Protection Clause of the Fourteenth Amendment did not apply to women, who only a half century before had earned the right to vote. Indeed, women were confined to second-class citizenship in most aspects of law and economic life. And while a growing percentage of young women attended college, it was a common refrain even in the mid-1970’s said only partially in jest, that most girls went to college for their “MRS” degrees.
I grew up when Leave It to Beaver and Father Knows Best filled the screens of American televisions, part of a powerful socialization process reinforced by churches and schools, textbooks and the mass media. Before the advent of Title IX, society encouraged boys to play sports and girls to be spectators and cheerleaders. We were bombarded from infancy with portrayals of stereotypical sex roles, with advertising images of women as housekeepers and mothers, happily folding the laundry and cooking dinner in service to husbands attending to more pressing matters.
And then everything changed.
In 1963, Betty Friedan, a suburban housewife who supplemented her husband’s income by writing freelance articles for women’s magazines, published The Feminine Mystique. Several years earlier, Friedan had surveyed her Smith College classmates at their 15-year reunion and found that this highly educated and talented group of women, mostly housewives in their mid-30’s, were deeply dissatisfied with the state of their lives. From these and other interviews, and drawing on history, psychology, sociology and economics, Friedan wrote what would become one of the most influential books of the 20th Century. The Feminine Mystique described Friedan’s insights into the soul-draining frustrations of educated, stay-at-home women in the 1950’s. She called it “the problem that has no name”:

The problem lay buried, unspoken, for many years in the minds of American women. It was a strange stirring, a sense of dissatisfaction, a yearning that women suffered in the middle of the twentieth century in the United States. Each suburban wife struggled with it alone. As she made the beds, shopped for groceries, matched slipcover material, ate peanut butter sandwiches with her children, chauffeured Cub Scouts and Brownies, lay beside her husband at night – she was afraid to ask even of herself the silent question – “Is this all?” 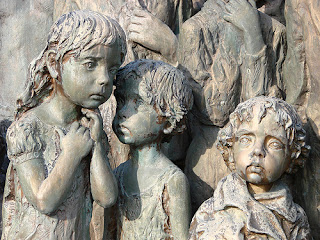