Some Thoughts on Faith, Politics and the Christian Divide

What we would like to do is change the world – make it a little simpler for people to clothe and shelter themselves as God intended them to do. And by fighting for better conditions, by crying out unceasingly for the rights of the poor, of the destitute, we can to a certain extent change the world. We can throw our pebble in the pond and be confident that its ever-widening circle will reach around the world.

Perhaps President Obama put it best when reflecting personally on his faith in 2010: “[W]hat we can do, as flawed as we are, is still see God in other people, and do our best to help them find their own grace.”
Posted by Mark J. Ehlers at 10:07 PM 10 comments: 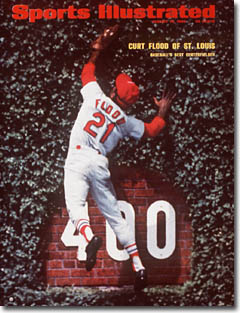 I’m a child of the sixties, I’m a man of the sixties. During that period of time this country was coming apart at the seams. We were in Southeast Asia. . . Good men were dying for America and for the Constitution. In the southern part of the United States we were marching for civil rights and Dr. King had been assassinated, and we lost the Kennedys. And to think that merely because I was a professional baseball player, I could ignore what was going on outside the walls of Busch Stadium. . . All of those rights that these great Americans were dying for, I didn’t have in my own profession. – Curt Flood