Idealism Tempered by Reality: Robert Kennedy in the Shadow of JFK 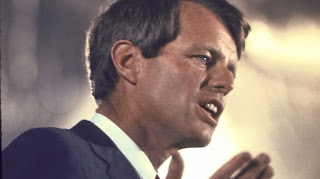 Few will have the greatness to bend history itself; but each of us can work to change a small portion of events, and in the total of all those acts will be written the history of this generation. – Robert F. Kennedy, South Africa, 1966

Coming of age in the 1970s, I was fascinated by the Kennedy brothers, the glamour, the mystique, the all-American mythology. From my reading of history, I admired the cool dispassion of John and the passionate moralism of Robert. Later, I would come to admire the legislative skills of Ted. Despite their many and varied flaws, over the years the Kennedy brothers have remained a source of inspiration to me, more for what they represented than for what they accomplished. Their public personas embodied the promise of America and the ideal of public service. In our collective imagination, the Kennedys appealed to the better angels of our character and articulated a poetic and aspirational vision of America.

Admittedly, my youthful fascination with the Kennedys has been tempered by life and maturity, by the recognition that the wealth and status associated with the Kennedys are matters of fortune and luck; the life of a Kennedy bears little resemblance to reality for most of us. Camelot was a myth of our own imagining. The reality of their lives was messier and more complicated than their public relations machinery presented. But their impact on the concept of public service left an indelible and inspiring mark on the fabric of American history. 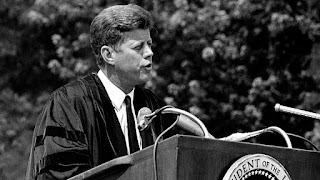 As President, John Kennedy understood that the problems and challenges America faced in his time were of pre-existent origins. Governing did not allow for mythological and utopian thinking. JFK made public service something to be admired and respected. He established the Peace Corps and sent young men and women to far off lands on missions of goodwill. He encouraged America to reach the moon and explore the universe. He advocated public support for the arts. He presided over the Cuban missile crisis with exceptional tact and competence. He understood the perils of nuclear ambition, the horrific consequences of nuclear war, and the environmental devastation of atmospheric testing. Although his presidency was cut short before he could achieve his most ambitious objectives, he pointed us in the right direction.

But to study the Kennedys is to encounter disappointment and regret for the lost potential of what might have been. Although JFK’s presidency lasted only 1,000 days, by November 1963, he had developed into a true national leader. Months earlier he had acknowledged the moral imperative of civil rights and the injustices of the Jim Crow South. It took Lyndon Johnson to harness the Kennedy myth and America’s love affair with Camelot to succeed where Kennedy failed – in civil rights and an assortment of federal programs that aided the poor and middle class in substantial and lasting ways. But history treats our fallen heroes more kindly than others. JFK’s mythic legacy has outlasted Johnson’s hard-scrabbled achievements. And it is a legacy owed in part to younger brother Bobby, who played a unique role in American history as Attorney General and the President’s protector, confidante, and advisor.

Few people in public life have demonstrated a larger capacity for personal growth and reflection than Robert “Bobby” Kennedy did in his final decade of life. In his earlier years, Bobby fought the Cold War and opposed Communism while otherwise advancing the political interests of his brother. When he became Attorney General, Bobby studied first-hand the injustices of segregation and racism. He reprioritized the Justice Department’s resources to fight the mafia and its corrupting influence on American institutions, including labor unions. He immeasurably helped guide JFK through the Cuban missile crisis. His reputation for being tough and ruthless evolved into one of a respected and thoughtful public figure.

By the middle of the 1960s, Bobby’s concerns were focused on a broader set of issues. By then, he had become the one Kennedy whose passions, ideals, and intellect were best suited to lead the United States through a time of division and strife. Like his brother, he did not live long enough to fulfill his dreams of racial reconciliation, economic justice, and peace, but his personal, moral, and intellectual growth during his last several years of life was truly impressive.

Bobby understood far better than John what it was like to experience neglect, to be overlooked and forgotten. He was in many ways the runt of the litter, the smallest and scrappiest of the Kennedy brothers, the least golden of these all-American golden boys. Not to overplay this – he was still a rich, privileged Kennedy, with all of the advantages that accompany wealth and fame. But later in life, when he personally witnessed the extreme poverty, as described by Michael Harrington in The Other America, of Appalachia and the Mississippi Delta; rubbed the cheeks of malnourished black children and saw entire families living in shacks with no running water or sewage – he was sharply awakened to the reality that, even in America, the richest, most powerful nation on Earth, injustice and inequality were widespread.

A devout Catholic of Jesuit influence, with a strong social justice instinct, Robert Kennedy was a problem solver who cared little for political ideology. By the time he became a U.S. Senator from New York, he was interested only in solutions that worked, that made people’s lives better. When his eyes were opened to the sufferings of impoverished and underprivileged Americans, Bobby could not fathom that these injustices existed so epidemically in the United States. He came to believe the Cold War would be won more effectively in how we confronted inequity and injustice than by how many nuclear warheads we possessed.

Among the great divides in America today is that between the cynics and the idealists. There remain few of the latter. Perhaps only Barack Obama, who wished to unite Americans of every race and ideology, has come closest to resurrecting the idealism of RFK. Obama’s vision of a people united in the common good was blocked by Mitch McConnell and his Republican strategists. And we will never know if RFK could have successfully bridged the wide gaps that existed in the late 1960s between black and white, rich and poor, urban and rural. 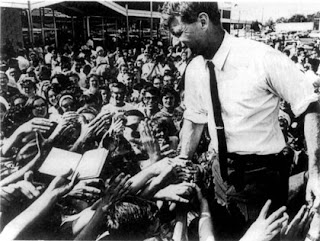 By the last few years of his life, Robert Kennedy had become a prophetic and unifying voice at a time when our nation was divided over Vietnam, civil rights, and the sexual revolution. He responded with sensitivity, intelligence, and compassion in ways that distinguished him as a uniquely thoughtful leader. He gave voice to reason at a time when many Americans had lost faith in our institutions.

He was liberal without being elitist, and he did not shy away from telling people things they did not always want to hear. He opposed the Vietnam War, but told affluent white college students that they should not be allowed educational deferments from the draft and leave the fighting overseas to poor whites and racial minorities. He was a champion of civil rights but strongly supported the rule of law and the prosecution of rioters and looters. He was a champion of the poor but did not like many traditional welfare programs, believing they were degrading and humiliating to the recipients. He called instead for “a massive effort, public and private, to provide jobs and housing and hope to the people who dwell in the Other America.”

For 82 days in 1968, a time of massive unrest, it appeared that Robert Kennedy was the only American politician who could successfully bring America together. Although he took too long to enter the race, once he announced his candidacy, he presented America with a clear case for why he was running: to end the war in Vietnam; to bring people of different races and ethnicities together; and to fight poverty and economic injustice. An awkward, inconsistent speaker in his younger days, he found a self-confidence and eloquence that had previously eluded him.

We cannot undo history, but must contend with the reality of today. In looking back over the past 50 years, it is hard not to long for a man or woman as passionate and idealistic as the Robert Kennedy of the mid- to late-1960s. As the historian Arthur Schlesinger Jr. wrote of Kennedy, “History changed him, and, had time permitted, he might have changed history.”

At a time when few politicians could do so, Bobby Kennedy forged a coalition of working-class whites and blacks, and helped them recognize that they shared common interests. It is why the memory of his life and sudden death haunts us still.

As Thurston Clarke wrote in The Last Campaign: Robert F. Kennedy and 82 Days that Inspired America (Holt, 2008), people from all walks of life mourned Kennedy’s death “because they sensed that he had tried to educate rather than manipulate them, reconcile rather than divide them, engage them in a dialogue rather than feed them the message of the day, appeal to their better angels instead of their wallets, and demand sacrifice instead of promising comfort. They mourned him because they ached for a leader who could heal their wounded nation and restore its tarnished honor, and because they ached to feel noble again.” America today needs another Bobby Kennedy, his idealism and unifying spirit. We need someone who will help us feel noble again. 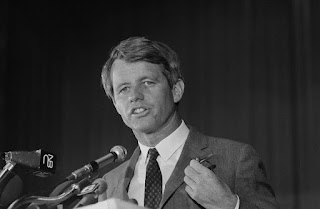 The youthfulness I speak of is not a time of life, but a state of mind, a temper of the will, a quality of the imagination, a predominance of courage over timidity, of the appetite for adventure over the love of ease. It is the spirit which knows the difference between force and reason. It does not accept the failures of tomorrow. It knows that we can clasp the future, and mold it to our will. . . . Leadership which is true to the spirit will recognize the source of our happiness; it will know that we will find fulfillment not in the goods we have, but in the good we can do together. – Robert F. Kennedy, Los Angeles, 1968