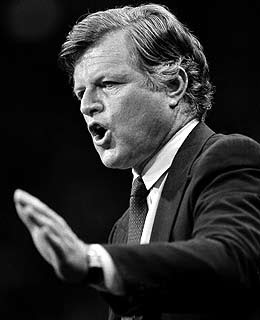 His is a uniquely American story, one of triumph and tragedy, sin and forgiveness, personal failing and public redemption, a life that, in the end, left the United States a more equal and just society and the world a better place. I was only three years old when Ted Kennedy was first elected to the U.S. Senate, so I am particularly saddened by his loss this week. For the past nearly 47 years, he has been a major force in American politics and a constant presence in the events of our time. I feel a profound sense of loss, as if his passing marks the end of an era, the final chapter of Camelot. He was not the brightest of the Kennedy brothers, nor the most eloquent, but he was the most hard working and, in the end, it was Ted, not John, not Robert, who materially improved the lives of millions of Americans – advancing the causes of economic justice, civil rights, health care, medical research, education, inclusiveness, and peace.

Although I always admired the flair and charisma of John Kennedy, through the years I have maintained a particular affinity for Robert Kennedy, a prophetic and unifying voice at a time when our nation was in turmoil, divided over Vietnam, civil rights, and the sexual revolution. He gave voice to reason and justice at a time when many Americans had lost faith in our institutions, our laws, and our values. It was Ted’s eulogy at Robert’s funeral, however, that captured best the significance and meaning of Bobby’s life:

My brother need not be idealized, or enlarged in death beyond what he was in life, to be remembered simply as a good and decent man, who saw wrong and tried to right it, saw suffering and tried to heal it, saw war and tried to stop it. Those of us who loved him and who take him to his rest today pray that what he was to us and what he wished for others will someday come to pass for all the world.

41 years later, these words may just as easily be spoken of Ted, a flawed but decent man, whose public legacy lives on in the great legislative achievements of the past half-century. It was Ted who led the fight for, and helped to enact, virtually every major civil rights bill since 1964 -- laws that improved the lives of millions of ordinary and previously disenfranchised Americans, giving voice and political power to blacks, Hispanics, Native Americans, and women. Ted led the way in passing and later renewing the voting rights, fair housing, and public accommodation laws of the 1960’s, and fought the Reagan Administration’s attempt to gut these laws in the 1980’s. He led the fights for immigration reform, the abolition of the draft, and the right of 18 year-olds to vote. He was instrumental in passage of the Americans with Disabilities Act, and his fight for universal health care spanned nearly his entire legislative career and became, in some ways, the cause of his life.

A man of wealth and privilege, he became the voice of the poor and the outcast, the protector of working families and the middle class, and a passionate advocate for peace. He fought tirelessly to increase the minimum wage, to provide health care for the unemployed, to fund cancer research and services to those with HIV and AIDS; he was instrumental in obtaining federal funding for community health centers, Meals on Wheels, and health and nutrition programs for pregnant women and infants. He articulated the cause of peace in Northern Ireland and the end of apartheid in South Africa. And at a time when most of his Democratic colleagues lost their backbone, he passionately opposed the War in Iraq. The list goes on and on.

Ted will be remembered as one of the most effective Senators in U.S. history, one who understood when to hold firm to principle and when to compromise, when to fight and when to shake hands. He understood that politics is, and always has been, the art of the possible and, while he was unwavering in his desire to give voice to the least powerful in society, he understood that you must sometimes accept small victories before you can achieve larger ones. But even when he compromised, he never lost sight of the larger objectives, the dream of a better, safer, more equal and more just America.

He was fun loving and gregarious, the life of the party and, as we know, at times incredibly reckless. He was indeed an imperfect man. But intertwined among his many failures was profound suffering. He lost all three of his brothers and a sister by the time he was 36, buried three of his nephews, and experienced the pain only a father can feel when cancer and illness strikes a child. It would have been completely understandable on numerous occasions had he simply wallowed in self-pity and withdrawn from public life. Yet the pain and suffering he experienced internalized within him a profound sense of humility, and empathy for the sufferings of others. Despite his fame and fortune, he has frequently reached out in deeply personal ways to others burdened by pain, loss, and the need for redemption. Think what you may of his personal failings, but he has suffered more tragedy and loss than most of us will ever know in a lifetime, and yet he has shown a resilience and perseverance to work for a more just and caring society. And along the way, he helped raise three children and acted as the surrogate father to twelve nephews and nieces who had lost theirs.

The heart and soul of the Democratic Party, Ted was unapologetically moral in his public discourse, something very few Democrats over the years have been able to master. Unlike his ideological opponents on the right, however, Ted’s morality did not concern the private lives and failings of others – of which he knew he had fallen short – but instead concerned a public morality, the duty and obligation of Americans to take care of the weak and powerless.

One morning in the late 1970’s, I took a break from my college studies to watch an episode of the Phil Donahue Show, when Senator Kennedy was the guest. Pointing to charts and graphs, he argued his case for national health insurance. Although I cannot remember the statistics he recited that morning, I do remember the moral simplicity of his argument, one based on a strong sense of right and wrong – that in the richest country on earth, a nation blessed with abundant wealth, talent, and natural resources, basic medical care was a right, not a privilege. Kennedy understood just how privileged he was, and he believed with all his heart that the working class Irish family in South Boston and the poor black family in Roxbury had as much right to take a sick child to a doctor as did a millionaire from Martha’s Vineyard. He believed that, in America, health care was not a commodity to be bought and sold like soap and toothpaste. His concern for the poor, the disabled, the disenfranchised, came from his deep Catholic faith, one that stressed an obligation to care for the poor, the sick, and the less fortunate. It is no accident that the Gospel lesson at Kennedy’s funeral was a reading of Mathew 25:40, “whatever you did for the least of these my brethren, you did for me.”

On June 6, 1993, the 25th anniversary of Robert Kennedy’s death, I attended a Mass for Courage and Reconciliation at Arlington Cemetery. It was a magnificent affair, attended by the entire Kennedy clan, along with President and Mrs. Clinton and an assortment of dignitaries. A beautiful summer evening, I was seated on the grass very close to the invited guests (I remain forever grateful to Patricia Riley, my then supervisor at the U.S. Attorney’s Office, who had worked in Robert Kennedy’s senate office when he was assassinated and who invited me to attend this event). Senator Ted Kennedy read from Ulysses by Tennyson, one of his brother’s favorite poets. The words reflect, in part, why I continue to be inspired and moved by the mystique of the Kennedy brothers. It is not so much who they were as individuals – for they, like us, were flawed human beings with varying strengths and weaknesses – but for what they symbolized: A sense of purpose, a higher calling, a constant striving for perfection. I love the Kennedy brothers because they have inspired in me a desire to be a better person, to do more for my community and my country, to aspire to an ideal for which I cannot help but fall short. On that summer night in 1993, Ted recited these words:

Come, my friends
‘Tis not too late to seek a newer world.
Push off, and sitting well in order smite
The sounding furrows; for my purpose holds
To sail beyond the sunset, and the baths
Of all the western stars, until I die.

It may be that the gulfs will wash us down;
It may be we shall touch the Happy Isles,
And see the great Achilles, whom we knew.
Tho’ much is taken, much abides; and tho’
We are not now that strength which in old days
Moved earth and heaven, that which we are, we are ---
One equal temper of heroic hearts,
Made weak by time and fate, but strong in will
To strive, to seek, to find, and not to yield.