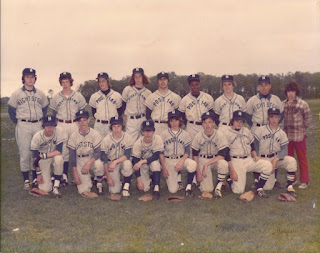 I was a few weeks shy of my fifteenth birthday when this photograph was taken in the spring of 1974. A first baseman/pitcher for the Hightstown Rams Freshman Baseball team, I am the first person on the left, kneeling in the front row, the serious looking one with the black batting gloves and blue-and-white wristbands – pretty cool, huh? As a motley bunch of adolescent males adorned in faded and used, mismatched uniforms, we were a low budget operation from an undistinguished school district. We were not the Greatest Generation or the most talented group of ballplayers that ever existed, but we were young, full of energy, and serious about our craft. At that moment in time, we did not yet realize that our dreams were unrealistic, that our lives in baseball would essentially end a few years hence. But for a few hours every day in the spring of ‘74, we were a team.

“I see great things in baseball,” said Walt Whitman. “It's our game - the American game.” Baseball is a part of the American landscape, an essential component of our history. Whenever I fly to another city, I try for a window seat so I can look down on the vast countryside below as the plane begins its descent. It helps me appreciate the beauty and majesty that is America, the diversity of our geography and the expanse of our physical environment. But the one common denominator in every city and town I visit, the one thing that links us as a culture and a people, are the many baseball fields and ballparks that blend into the earth’s surface. Not all ball fields are equal, to be sure. A few have perfectly manicured grass fields and well-defined fences, fancy dugouts and lights; many others show signs of neglect, a blotchy mixture of dirt and brown grass and paint-chipped benches. But the dimensions remain constant, the bases ninety feet apart, the pitcher’s mound sixty feet six inches from home plate. The sights and sounds, the smell of grass and dirt and some guy named Frank smoking a cigar on the sidelines can be found at almost every park. It is a game for romantics; the dreams imagined and experienced on these fields are the same that young boys across America (and Latin America) have experienced for more than a century.

I grew up in central New Jersey, the cultural wasteland which influenced the early music of Bruce Springsteen, who grew up fifteen minutes away in Freehold. Hightstown was but an exit on the New Jersey Turnpike (Exit 8), a way station for commuters, a mere afterthought that lingered in the shadows of the great cities to our north and south. My brother Steve and I developed our fielding skills by hitting ground balls to each other, over and over again, in our backyard, a quarter-of-an-acre of converted farmland that had been turned into the housing developments you find in middle-class communities all across the United States. Every third house looks just like the other, distinguished only by the color of the shingles, a hint of brickwork, or the placement of trees and bushes in the front yard. On warm days could be heard the hum of a lawnmower or the rhythm of children riding bicycles. There was little to do in Hightstown, no art museums or great universities, no historical landmarks. It was an all-American town of pizza parlors and hoagie shops, gas stations and convenience stores.

But I never felt at a loss for something to do. My life was sports, my love was baseball. My friends and I played touch football in the fall, basketball in the winter, and baseball all spring and summer. Unless I was sick or a severe Nor’easter was underway, not a day went by that I didn’t have a ball of some kind in my hand. Whether tossing a football at the neighborhood park, shooting hoops in my driveway (the backboard and net at regulation height above our garage), playing groundball games or sock ball with my brother, or throwing a baseball against pitch back netting in my backyard, thoughts of big league glory filled my head, the imaginary crowds erupting upon my every display of choreographed heroics.

There comes a time in life when you must outgrow childhood dreams, when your ambitions must shift to more practical, important, and socially useful endeavors. When, finally, in the words of John Thorn, “the dream of playing big-time baseball is relinquished so we can get on with grown-up things.”

Nearly four decades has passed since that freshman season, but I still remember the final game of the spring. In four trips to the plate, I had hit the ball hard every time with only one double to show for it. In my last two at bats I laced long, arcing fly balls into deep left field. Unfortunately, the leftfielder was standing somewhere in Pennsylvania (we had no fences) and he tracked both fly balls, catching each of them just after I had rounded first base and headed to second. Our coach, Charlie Pesce (standing at the far right in the back row, next to the statistician), a stern but fair man who expected much and demanded more, an authority figure I respected and admired, came up to me after that game as I stood by my locker. He was much shorter than I, but it did not detract from his authoritative air. He reached out his hand and said, “Congratulations on a good season. You have a future, son.” He could not have known how much those words meant to me at the time, or how much they would hurt a few years later when I abandoned my dream of playing professional baseball.

"Time is a very misleading thing,” said George Harrison. “We can gain experience from the past, but we can't relive it.” I would play only three more seasons of organized baseball, some Senior Babe Ruth League, varsity high school and American Legion ball, until I accepted, finally, that baseball was not a career option. My eyesight betrayed me and I had yet to discover contact lenses; I began to swing late on pitches and possibly lacked the mental toughness to reach a higher level. I became distracted by the noise of life, or maybe I didn’t need baseball as much as I thought I did. I have few regrets about where life has led me. But when, as I occasionally do, I wander over to a high school ballgame and take in an inning or two under the twilight sun, I cannot help but think back and relive those moments, now frozen in time, when I was a young man with a glove on my knee, legs slightly bent, shouting encouragement to the pitcher in anticipation of the next pitch and the batter's reaction. It is at those moments, even today, when I wonder if I could have done better, achieved more, and turned the hopes and dreams of that wrist-band wearing teenager into reality.

Eleanor Roosevelt once said, “The purpose of life is to live it, to taste experience to the utmost, to reach out eagerly and without fear for newer and richer experience.” I have tried to live my life with this in mind. But there is a part of me that never left the scrappy, bumpy, low budget ball fields of my youth. To this day, there is something soothing and certain about baseball, which is partly why I cannot escape its absorbing pull. Baseball is one of the few constants in a disorderly world. “If you get three strikes,” said Bill Veeck, “even the best lawyer in the world can't get you off.” There is a comfort to such order, to knowing that, at the end of each season, the outcome is fair, the results a close approximation of individual and team accomplishment.

I do not know where most of my freshman teammates are today. Many of them played with me at more senior levels, but the year I left for college, my family moved to New England. I don’t know how many of my teammates attended college, got married, divorced, or had families of their own. I cannot tell you today where most of them live or even how many are still alive (though sadly, Bobby Spearman, the lone African American on that team, and one of the nicest guys you would ever want to meet, died a few years ago, just past his 50th birthday). I was not friends with all of the young men in that freshman baseball picture. Hell, I didn’t even like all of them. But when I look back on this picture, I am filled with a sense of compassion and admiration for every one of them.

Gather ye rosebuds while ye may,
Old time is still a-flying:
And this same flower that smiles to-day
To-morrow will be dying.

The glorious lamp of heaven, the sun,
The higher he's a-getting,
The sooner will his race be run,
And nearer he's to setting.

That age is best which is the first,
When youth and blood are warmer;
But being spent, the worse, and worst
Times still succeed the former.

Then be not coy, but use your time,
And while ye may, go marry:
For having lost but once your prime
You may for ever tarry.
--Robert Herrick