Stan Musial and the Coming of Spring 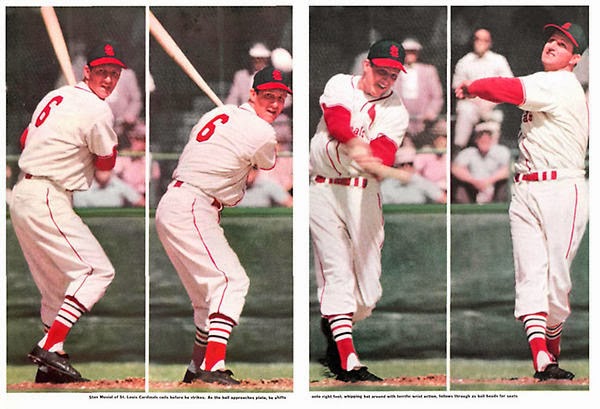 [The] player I liked best was Stan Musial, the lithe slugger of the Cardinals, just back from the war, who always seemed to be smiling as he went about his business of smiting terror in Brooklyn. Stan the Man, as we had named him, seemed to represent all the daily goodness of his sport – the workaday regularity, the possibilities, the joy. – George Vecsey in Stan Musial: An American Life (Ballentine Books, 2012)

Sometimes it is the mind that rescues us, the imagination of a grown man with a boy’s heart that soothes a beaten and tired soul. Another arctic freeze brought ice storms and power outages to the Philadelphia suburbs at the start of February, forcing Andrea and I into temporary exile as we fled our dark and heatless home. How I long for relief from winter’s grip. The lingering cold has cast a cruel glare upon the fragile and traumatized life in its path. More snow arrived this week, adding to record accumulations. And yet, there is hope, a glimpse of sunshine in the awakened slumber of the American South.

Pitchers and catchers reported to work on Wednesday, marking the beginnings, in Florida and Arizona at least, of the annual rite of spring. From aging veterans and newly-signed free agents to aspiring rookies and hopeful minor leaguers, players stretch and toss and run wind sprints in an effort to get ready for opening day, when everyone believes in miracles. The 32 baseball teams that form the elite version of the American pastime have gathered to prepare for another season.

I willed the start of spring earlier than usual this year, buying a copy of the annual Sporting News Baseball Preview at a local newsstand in the tunnels of Suburban Station on my daily commute home. Glancing at the pages of this year’s issue warms my spirit if not my body as I peruse the projected rosters for each team, the predicted winners and losers, and last season’s statistics. Looking from my window at the snow-covered ground below, I glance at this year’s preview and am energized by photographs of Yadier Molina squatting behind home plate in the glare of the summer sun; of Matt Carpenter finishing his swing as he accelerates from the batter’s box; of Adam Wainwright in an extended leg kick as he releases his curve ball, the momentum of his body thrusting forward so that he can almost touch where the pitcher’s mound meets the infield grass.

This is the time of year when I once again dream of a glorious season. When the youthful endeavors of grown men playing a boy’s game allow for memories of childhood; for the smell of grass and dirt and a leather glove, and of spikes and sweat and the cool scent of spring.

*    *   *    *
Although he left us a year ago, I made it a point recently to learn more about one of the most underrated and underappreciated players of all time, the late great Stan Musial of the St. Louis Cardinals. I was only four years old when Musial retired at the end of the 1963 season, not yet awakened to my love of baseball or of the Cardinals. Within a few years, I would be forever hooked as a loyal and dedicated member of Cardinal Nation, a devoted follower of Bob Gibson, Lou Brock, Orlando Cepeda, and every player lucky enough to don the red-and-white birds-on-the-bat. I would hear good things about Stan the Man, always good things – that he was a kind and generous human being, one of the greatest hitters of all time, the face of the franchise for nearly 22 seasons. But he was a face of the past, an old timer, an irrelevancy to the life and passions of an eight year-old boy who fell in love with baseball as it was then being played. Like most young boys, I failed to appreciate the people and events of yesteryear, which continue a long line of history and tradition that contributes to the greatness that is baseball.

Last week, I finished Stan Musial: An American Life by George Vecsey, the talented and long-tenured sports columnist for The New York Times. An uplifting biography, as much a tribute to the man as the ballplayer, I feel at long last connected to Musial’s life and career in ways that have eluded me all these years. A lifetime .331 hitter, Musial was a twenty time all-star and three-time MVP. He led the National League in batting seven times and today remains fourth on the all-time hit list (3,630) despite missing the entire 1945 season to serve his country during the Second World War. At the height of his career, he held more than 50 National League and Major League hitting records. He led the league eight times in doubles, five times in triples and, in 12,717 plate appearances, struck out only 696 times. He was a natural, a real life Roy Hobbs without the drama.

“He could have hit .300 with a fountain pen,” said his former teammate and baseball announcer Joe Garagiola. “There is only one way to pitch to Musial,” said Leo Durocher, the fiery manager of the Brooklyn Dodgers, “under the plate.” Preacher Roe, a four-time all-star pitcher, developed a different strategy: “I throw him four wide ones, then try to pick him off first base.” Carl Erskine, who won twenty games for the Dodgers in 1953, said he always had “pretty good success” with Musial “by throwing him my best pitch and backing up third.”

Life is easier for some people than for others. One can almost sense God smiling, puffing his heavenly cigar and taking a break from the world’s pain and daily struggles whenever Musial stepped to the plate. For Musial, baseball was a simple game, hitting a simple pleasure. “You wait for a strike,” he said, “then you knock the shit out of it.” The type of pitch didn’t much matter to him. “When a pitcher’s throwing a spitball, don’t worry and don’t complain, just hit the dry side like I do.”

Musial was not a flashy man. A working-class kid from Donora, Pennsylvania, he grew up in steel country during the Great Depression. His father, a Polish immigrant who labored in a mill outside of Pittsburgh, drank heavily and was, by most accounts, a distant father and unsupportive husband. It was a hard life, but Musial never showed it and never talked much about it. He instead developed a positive, optimistic air, a genuine humility that, even after years of stardom and celebrity, never left him. 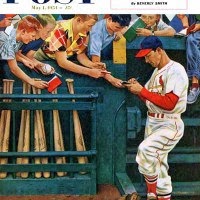 Unlike the ballplayers of today, Musial almost never turned away an autograph seeker, sometimes standing around long after a game ended to sign every scrap of paper put before him.  He played in America’s heartland, outside of the New York and Boston media spotlights. He didn’t marry Marilyn Monroe or carry an attitude. He married his high school sweetheart and remained in love with her for the rest of his life. He never got tossed from a game and didn’t stand at home plate after hitting a home run to admire his work – he never tried to show up anyone. When Jackie Robinson and other African American players arrived to the major leagues amid racism and prejudice, Musial was recognized for his decent and respectful nature. He treated everyone the same.

Mickey Mantle once said that he had more natural ability than Musial; Mantle was more powerful and could run faster. If not for injuries, hard drinking and hard living, Mantle may have been the best ballplayer to ever live. But late in his life, Mantle let it be known that he maintained a special respect for Musial, for the ballplayer and for the man. “Stan was a better player,” Mantle said, “because he’s a better man than me. Because he got everything out of life and his ability that he could. And he’ll never have to live with all the regret that I have to live with.”

“All Musial represents,” said sportscaster Bob Costas, “is more than two decades of sustained excellence and complete decency as a human being.” He was, wrote the Los Angeles Times following Musial’s death in January 2013, “incredibly good for an incredibly long time and an unbelievably nice guy.”

In hindsight, it is not difficult to see why Musial was such a happy, content human being. He was a humble man who loved life, remained devoted to his family, and appreciated the gifts he had. He understood just how lucky he was to have the opportunity to do what he loved the most, to play the greatest game on earth, a young boy’s game in a man’s world. “I love to play this game of baseball,” Musial told Sport Magazine in 1963. “I love putting on this uniform.” For Musial, it was that simple.

If heaven exists, you can bet Musial is there now, wearing his familiar number six and kneeling in the on-deck circle, waiting patiently for his turn at bat. He may not have a lot of company up there – many of his fellow ballplayers may not have made the Great League in the Sky – but Musial undoubtedly dons his uniform and grips the handle of his favorite wooden bat. He is surely keeping God company, playing his harmonica every now and then, and graciously wishing the best for all of us. 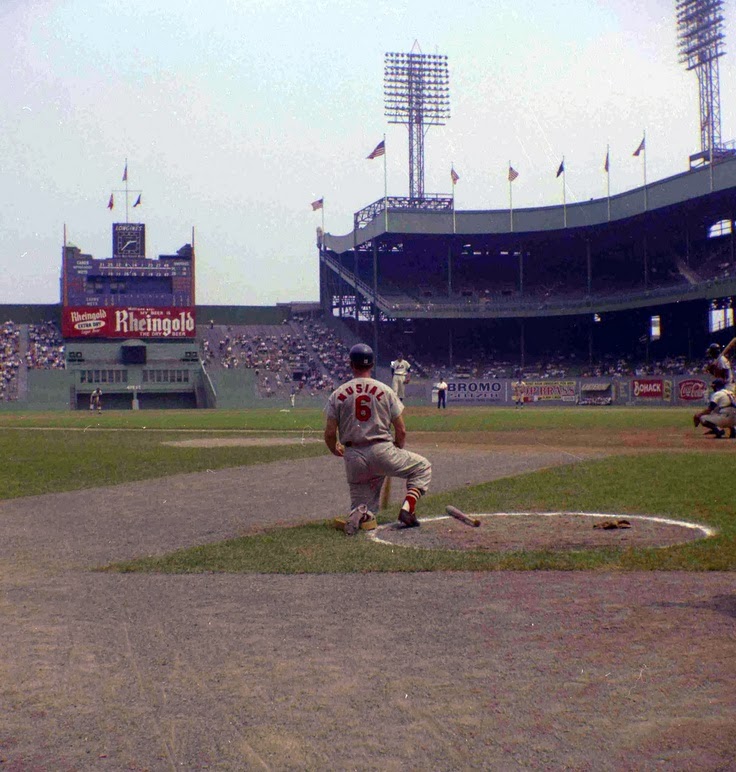