Lessons from Aurora: A Search for Common Ground 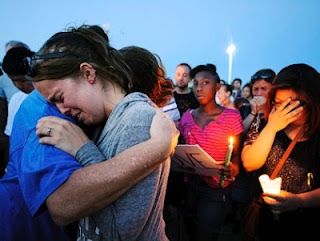 It is on days like this that we are reminded of how much more alike than different we are, when we see that tears have no color, when ideologies melt into a common heart broken by sorrow. – Charles Blow, The New York Times, July 20, 2012
Columbine.  Virginia Tech.  Tucson.  Aurora.  The meaning of each place was forever altered by the random violence of troubled people. When news of a mass shooting first breaks, we are immediately confronted with images of guns, death, and violence, the blood of victims, and the tears of friends and family.  As a parent, I know that but for the grace of God have I not received that frightening call, to learn that my child is the victim of a random, senseless shooting, at a school, a college campus, a political event, a movie theater. In Aurora, as elsewhere, memorials will be built, foundations established, and vigils held.  “Where there is sorrow there is holy ground,” wrote Oscar Wilde.

I wish I could write that these events are a relatively new phenomena in the United States, or that however tragic, are exceedingly rare.  We are America, after all, the home of the free and the land of the brave. But it takes very little searching to realize that this simply is not so. Sadly, tragically, indiscriminate shootings occur all too frequently within our borders.  According to Time magazine, the United States averages nearly 20 shootings every year in which four or more people die.  Aurora is only the latest example.  The Brady Campaign to Prevent Gun Violence has compiled a 62-page list of over 400 mass shootings that have occurred since 2005.  They seem almost routine:
It is a list without end.  The truth is made worse by the reality that virtually no one in American political life has the guts or courage to speak out against the insanity of an American-bred culture of guns and violence that serves only to breed guns and violence.

“The bitterest tears shed over graves,” admonished Harriet Beecher Stowe, “are for words left unsaid and deeds left undone.”  It is time for the nation to search its soul, to come together and develop solutions to an all too American problem.

They say that “guns don’t kill people – people kill people.”  But when we equate liberty with the right of gun dealers and manufacturers to sell their death-molding instruments to as many people as possible; when we equate freedom with the right to buy as many weapons and bullets as one desires, we cannot be surprised when people use these instruments in destructive ways.

We live in a nation with an historical link and emotional connection to guns; in some circles, the right to bear arms is more sacred than the freedom of speech or the right of assembly, the separation of church and state or the right to privacy.  Politicians fear the gun lobby.  Money talks and the gun lobby is loaded with money.  American democracy and public safety have become collateral damage of a nation with a warped sense of the common good.  “The fault,” said Shakespeare, “is not in our stars, but in ourselves.”

We are nation of 300 million guns and few restrictions.  There are nearly nine privately-owned guns for every ten American citizens.  In most states, it is easier to obtain a license to carry a concealed weapon than it is to get a driver’s license; easier to buy a gun, or two or three, than to buy a car or open a bank account. Toy guns are more highly regulated than real ones.  Is it any wonder, then, that 30,000 Americans die every year from gun related deaths, while 100,000 of us are assaulted by guns?  What does it say about us as a people that, since the assassinations of Martin Luther King Jr. and Robert Kennedy in 1968, over one million Americans have died from gunshot wounds?

When 24-year-old James Holmes walked into a packed Aurora movie theater last week, he had in his possession two pistols, a shotgun, and a military-style AR-15 with a 100-round clip.  He had legally purchased all of his weaponry, along with a cache of 6,000-bullets.  For much of his arsenal, Holmes needed only a credit card and an internet connection.  And yet, after he opened fire, killing twelve innocent people and wounding 58 more, we acted shocked and surprised and talked about not politicizing the tragedy.  A few days later, we went about business as usual.

For the survivors of Aurora, and the families and friends of those who perished for no reason other than that they were in the wrong place at the wrong time, the tears and sorrow will linger for a lifetime.  “As we do when confronted by moments of darkness and challenge,” offered President Obama after the tragic shooting, “we must now come together as one American family.”

In the end, this is mostly an American problem.  We must develop our own solutions.  “The world is full of suffering,” said Helen Keller, “it is also full of overcoming it.”  It is time for common sense to prevail; to start a national conversation on everything from gun safety to the adequacy of our mental health system.

Gun proponents must accept the need for reasonable restrictions on gun ownership.  They must stop treating every attempt to restrict the unlimited sale of assault weapons and easy access to guns and ammunition as a threat to freedom.  Guns are not toys; they are instruments of death.  If we are going to allow ordinary citizens to own them, as a society we should be permitted to place a substantial burden on the individual to establish that he or she can be trusted with a gun.  Conversely, advocates of gun control must accept that there exists a long history and tradition of gun ownership in this country.  We must find a way to communicate in a manner that understands an individual’s constitutional right to bear arms and recognizes that there are many safe, responsible gun owners; and that laws alone will not prevent a determined, mentally disturbed person from accessing and using a firearm.  But we should not make it easy for him.

Among the victims in Aurora was Veronica Moser Sullivan, a six year-old girl with a beautiful smile; three men in their mid-twenties, each of whom died while shielding and saving the lives of their girlfriends; a 24 year-old woman who was an aspiring journalist; a 27 year-old Navy technician; a 51 year-old father who had accompanied his two teenage children to the movie; a 32 year-old mother of two; a 29 year-old Air Force reservist; an 18 year-old recent high school graduate; a 23 year-old woman who had saved her money and planned to travel abroad; and a 27 year-old man who died on his birthday, days before his first wedding anniversary.  “In the night of death, hope sees a star,” wrote Robert Ingersoll, “and listening love can hear the rustle of a wing.”  It is time to find common ground, to set aside partisan differences and develop ways to prevent another Aurora.  We owe it to the victims of the Aurora shootings.  We owe it to their families.  We owe it to each other.
Posted by Mark J. Ehlers at 11:11 AM